THE AGM OF TDCA HELD AT WOODGREEN ON APRIL 7TH 2001 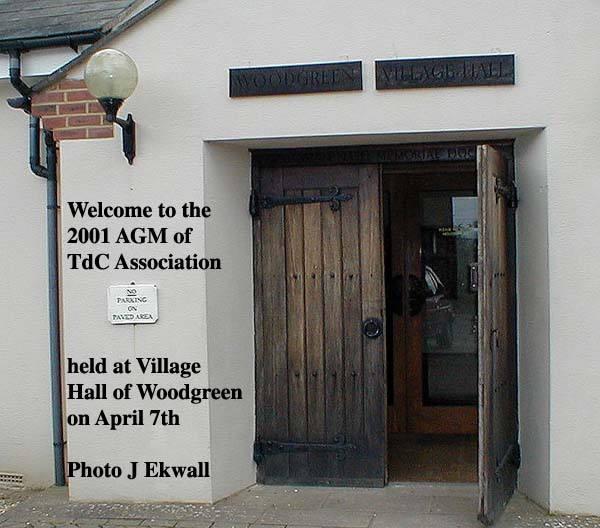 It was quite interesting to visit this years AGM of TdCA. After some late decisions I finally made my trip to the UK. Mostly inspired by my “sponsor” Mr Gregory Taylor. Going to just a special meeting means a lot of planning – especially getting something more out of a trip just designated for this rather narrow interest. As I had an arrangement with Gregory to pick me up near Hetahrow for the journey I had to figure out what to more on my UK visit. Arriving in London on Thursday – I decided right away to visit The Strand and the stamp shops around. I found the people at Stanley Gibbons quite uniterested of me and my special interest of the stamps of the South Atlantic. But i found the small shop of Vera Trinder to sort my problems out.. On Friday I finally got the chance of an invitation to visit Kew Gardens and a guided tour to the endemic plants of St Helena. A memorable visit for me especially as I was probably one of few who had the opportunity to see the seedlings from a formerly extict plant. Bingo for me. Saturday arrives and now the aim for my journey started. I was picked up by Mr Gregory Taylor (a New Zealander I met on last year’s AGM in London) near Heathrow. I was his guest so we made a little sightseeing while driving down to Woodgreen near Fordingbridge outside Southampton. Passing the Stonehenge – closed by the police (don’t know why) and heading in on Salisbury Plain for Avebury with it’s henge monuments. But inspite was Mr Blair said just some days before – this place was closed for Tourist due to the mouthandfoot disease. Pity. Finally we arrived at Woodgreen. The first person I saw outside the Village Hall was Mrs Baldwin (the former Adminstrator’s wife) and I was quite touched as I last saw here was when arriving to Tristan da Cunha some 3 years ago on the RMS. Coming inside it was crowded! Around 80 peoples was to take their seats. I noticed some familiar faces among new ones. 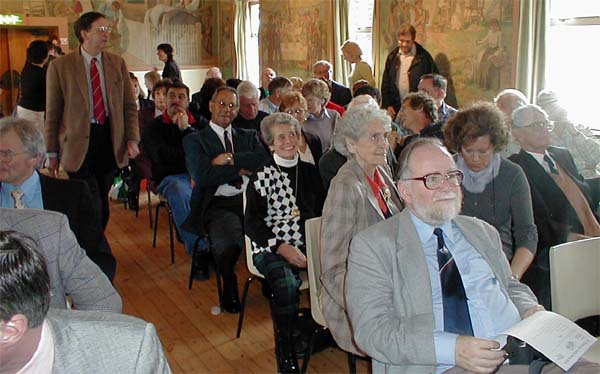 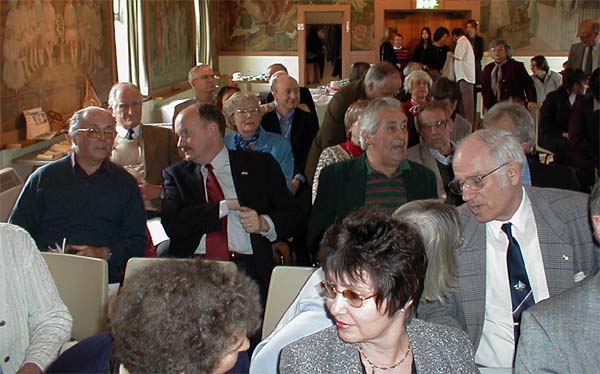 The meeting then began with some formalities. The President Mr Allan B Crawford opened and welcomed not more than 3 (or was its 4?) Administrators past and present of Tristan da Cunha. He was also glad over that more than 10 Islanders showed up (Swains and Repettos.)He espeially welcomed the new Administrator Mr Bill Dickson and some members from abroad. 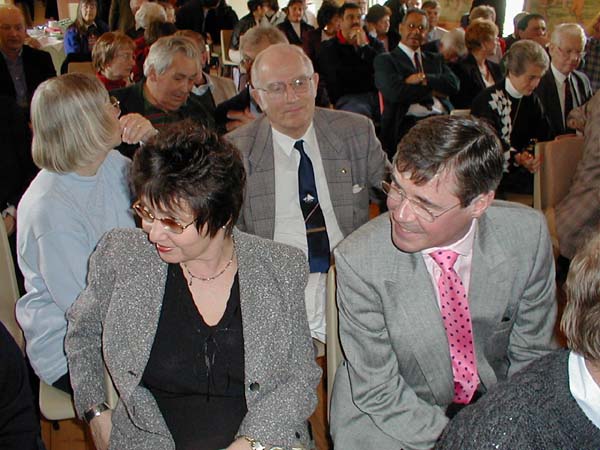 Then Mr Crawford presented his gift to the Ass. It was a copy of the orignal map drawned by himself during the Norwegian expedition led Mr Christophersen in 1937-1938. 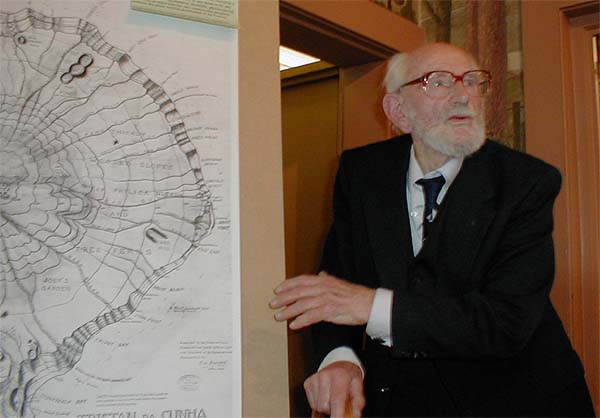 Unfortunately I was not allowed to take some pictures of this map in full due to restrictions. Anyhow its was a great moment for ABC and he got long applause for this initiative. I was quite happy sitting in “pole position” and taking this picture. And I think also Mr Ian Mathieson thought the sime. Mr Mathieson represented Miles Apart with the displays of South Atlantic books and other items from it’s remote island. Talking obout display there was also stamps for sales. Those of you who are interested in videos of South Atlantic Islands recognized Mr Charles B. Frater of Silverglades (now Parliamentary Films). He really came with a suprise to the audience – a video made from the 16mm films that Mr Crawford did from his visits in the 30ies and 40ies (and maybe later – I still haven’t seen the video quite through yet). 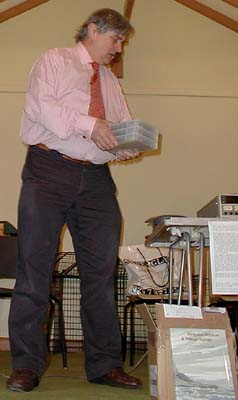 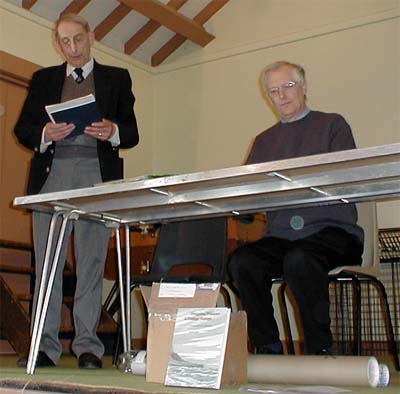 The the audience got the opportunity to watch a French video on Tristan da Cunha, earlier broadcasted on the Thalassa programme in French television. I have seen this film before and I was not that overwhelmed. The Italian video is far better. Then it was tea-time and a lot of cakes and sandwiches was at hand. At the same time it was time for mingle. Of course I took the opportunity to speak with Mr Brian Baldwin as well as Mr Bill Dickson – the new Administrator. While taking some photos – mr Crawford had many near friends of Tristan to talk with. 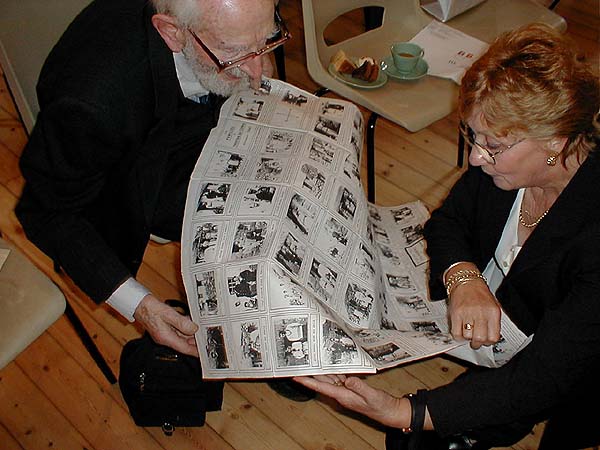 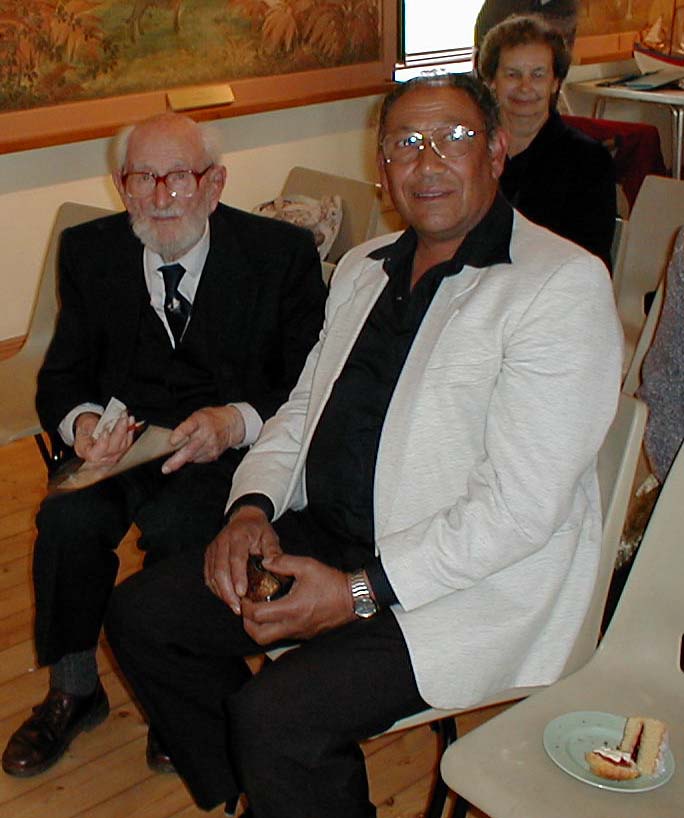 Others that have a chat was my friend Gregory with Mr Baldwin. We also got to know a Dutch couple who is planning to write a book on The Green Family of Tristan da Cunha. Mr Green (former Groen) – is of Dutch origin and that tells their deep interest in Tristan. 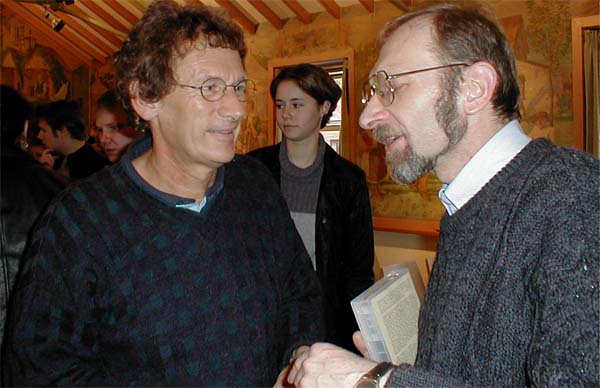 It was decided that next year’s AGM will probably will be at the same place on Saturday – a week after Easter. Hopefully this meeting, with the supervision by the former Administrator Mr Peter Wheeler, will be as good as this year.