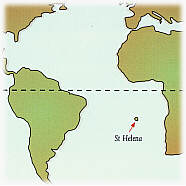 Are you planning a trip to
Saint Helena?
Click here for information

Index  Welcome to the homepage of  Saint Helena in the South Atlantic Ocean. You are visitor no. since May 1997. This site is situated in Sweden and hence the extension .se. Everything concerned with this site is nonprofitable.
The island of Saint Helena is no longer a hidden secret, you can find many pages on the Web dealing with South Atlantic Islands but only this site has a mailing-list, especially for those who have a deeper interest in Saint Helena, Tristan da Cunha and Ascension Island. The island offers a unique Napoleonic museum as well as interesting endemics – both flora and fauna. The only way to visit the island is by ship. The RMS St Helena (Curnow Shipping) has regular services to the Island from UK and Cape Town.
Gotland Games June 26 – July 2, 1999.
Front from left: Lisa Lawrence (swimming) and Shene Johnson (badminton). Back: Troy Bennet (100 and 200 m) and Andrew Moyce (100 and 400 metres). More information on The Gotland Games official www-pages. Search for a name, a place
or a word here
www.sthelena.se Sweden World Usenet
Miss St Helena ’99
The Miss St Helena Contest which was organised by the Half Tree Hollow Guiders, was held this year at the Consulate Restaurant/Ballroom in Jamestown, on Friday night 14th May.

coastline with 1000 feet high cliffs that have been carved over the centuries by the pounding Atlantic rollers. This ancient volcanic island is set in the tropical South Atlantic 1500 miles north-west of Cape Town. There is no airport and the island can only be reached by ship. St Helena became a British dependancy in 1834 and still retains its 19th century values and is imbued with some 300 years of colonial history; manifested in the architecture and ambience of Jamestown.

Leisure activities
The island is ten and a half miles long and 6 and a half miles wide is blessed with a pleasant climate with temperatures ranging between 14°C to 32°C in summer and 14°C to 26°C in winter. The island has a rich history and a fascinating heritage evidenced by the early military fortifications set in a spectacular scenery. There are superb walks which can be gentle or ardous, offering a chance to see the endemic flora and fauna. Visitors can enjoy the magnificent underwater scenry by diving or snorkeling around our island but should note that they must be accompanied by a local diver at all times. Spear fishing is prohibited. Good sport can be had by fishing in our waters. Tuna, marlin and barracuda are in abundance. If golf is essential part of your relaxation you will enjo the opportunity of playing 18 holes on the remotest golf course in the South Atlantic.

Bank/Currency
St Helena currency is used on the island. Coins in use have values of 1p, 2p, 10p, 50p and £1. Notes in circulation have values of £5, £10 and £20. One St Helena £ is equal to One British £ Sterling. There are no international banks, and credit cards are not widely accepted. Travellers cheques (1% commmission charge) are recommended.

Who’s behind this site?