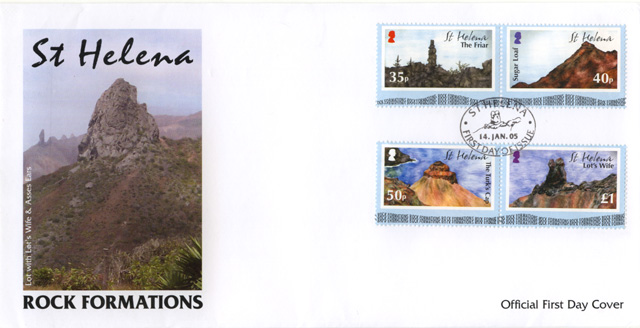 The island of St Helena forms the top of a gigantic volcanic mountain rising three miles from the floor of the South Atlantic. Breaking the ocean surface more than twelve million years ago, the two major volcanoes forming the island, the smaller north-eastern and the younger south-western, were active for approximately five million years. Eruptions of lavas and ashes were mainly from fissures, preserved as striking dyke concentrations (swarms) in their centres. There were also numerous individual parasitic centres on the volcano flanks. Some of these built up high scoria cones which were subsequently intruded by magma; lengthy erosion has exposed textbook “pipes” or unique small-scale arcuate bodies. In the east of the island thick, almost flatlying, lavas infill hollows left by two massive “slides”, which developed catastrophically when an entire flank of the north-eastern volcano became unstable and almost a quarter of it slid into the Atlantic. Probably the island’s most striking feature is the great erosional amphitheatre of Sandy Bay which reveals the heart of the south-western volcano, and the final spectacular series of events which ended its long and dramatic active life. Chemicallay the rock sequences are typical of oceanic islands, in a complete spectrum from alkali olivine basalts, through intermediate trachybasalts and trachyandesites, to late highly alkaline trachytes and phonolites. 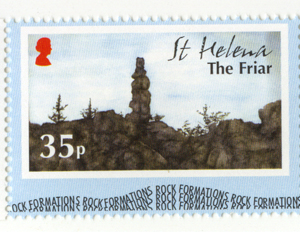 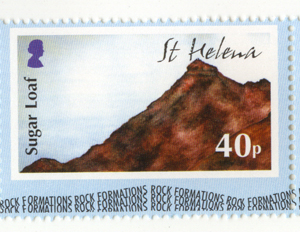 Basaltic lava – Erosion of a thick sequence of basaltic lava flows near New Ground, west of Jamestown, has left a steep, razor-edged ridge a relic pillar resembling the figure of a cowled Friar. A legend tells of a devout priest falling in love with a girl he found one day tending her father’s goats. The priest ultimately renolunced his faith, and as their marriage ceremony was about to conclude the rocks were rent asunder, and the chapel and its congregation were swallowed up, disappearing for ever down a crevasse. “In its place stands the gaunt image of the grim friar, an example and a sad warning to those who suffer their evil passions to prevail over their better judgement” (Melliss, 1875). Sequence of basaltic lava flows and ashes – Basaltic lavas constitute over two-thirds of the island’s rocks. Following the violence of its early life, the north-eastern volcano’s later flows in the the north of the island are relatively regular, laying in orderly layers. Many million years of erosion have produced Sugarloaf Hill. the northernmost point of the island. Sugarloaf guided ships approaching from the north, and those from the south-eat used the hill to turn sharply into the lee of the island. All ships had to present themselves to the defences, across the mouth of Banksee Valley and a collection of five batteries on the side and base of Sugorloaf Hill; friends received clearance to take up safe anchorage in James Bay – foes would receive a singularly violent rebuff. 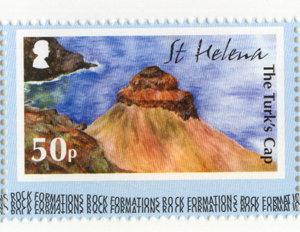 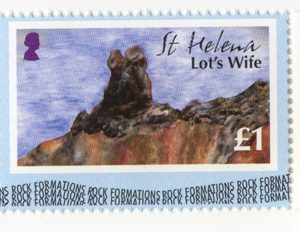 Turk’s Cap Lot’s Wife Trachyandesite lava flows – the charasteristic sloping flanks of lavas and ashes of the north-eastern volcano were replaced, following the gigantic landslips, by a broad, saucer-shaped basin. This was infilled with intermediate nflows the of prodigious (locally in excess of 100 meters!) thickness. An eroded remnant of three lava flows forms the slender ridge, ending in the two flows which make up the distinctive landmark of Turk’s Cap. The East India Company was always concerned with protecting the island from possible enemy landing, and the wild desolation of Turk’s Cap Valley and Bay is protected by two eighteenth century cannon bateries on the thin ridge behinf Turk’s Cap, and another more complex battery of six guns, almost rusted away in salted spray, on the shore at the feet of the appropriately named rock formation. Phonolitic dyke – Towards the end of its active life the south-western volcano produced quantities of phonolitic magma at depth. Seven or so million years ago this magma was injected into a series of great fissures cutting the body of the volcano for several kilometers. Deep erosion has revealed these features preserved as a series of great dykes, sculpted into spectacular rock pinnacles which give Sandy Nay much of its special character. One of these, standing on a long desolate ridge, is the 100 meter high Lot’s Wife; her “daughters” are nearby, and at some distances rises the larger volcanic “pipe” of Lot. In this wilderness of rock chasms and spoilheap landscapes at the very heart of the ancient volcano, two of the island’s endemic plants, thought extinct for centuries, have recently been discovered : the Saint Helena Ebony in 1980, a dawn shadow’s length from Lot’s Wife, and the Saint Helena Boxwood in 1998, in the harsh scree slope beneath Lot’s Wife’s southern profile. 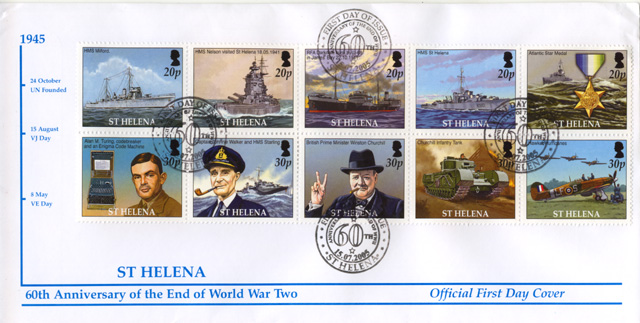 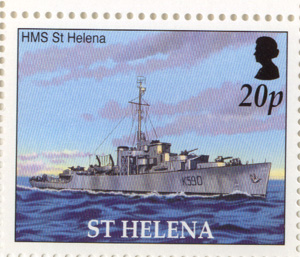 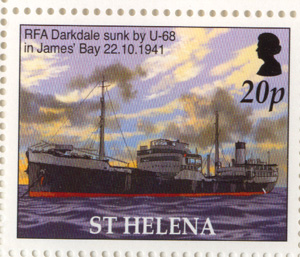 HMS St Helena RFA Darkdale Transferred to the Royal Nay and commissioned HMS St Helena (K-590) under the Lend_-Lease Programme, this American ship originally entered service as (Patrol-Gunboat) PG-194. HMS St Helena was styled as one of the Colony Class Frigates. Commissioned from 19 February 1944 and returned to US custody 8 April 1946, she was temporarily placed on the list of vessels on hand as St Helena (PF 86). Decommissioned on 23 April, the St Helena was scrapped 28 October 1947. A plaque commemorating those who lost their lives when the RFA Darkdale was torpedoed by U-68 in Jamestown harbour on th 22 October 1941 is attached the St Helena War Memorial. A special service was held on 14 April 2001 to dedicate the plaque, which records a description of the events of 22 October 1941 and the names of those who where lost. There were only two survivors from a crew of forty six. 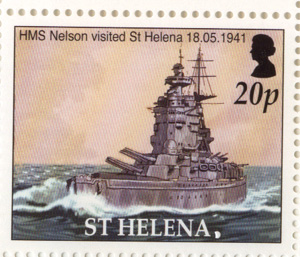 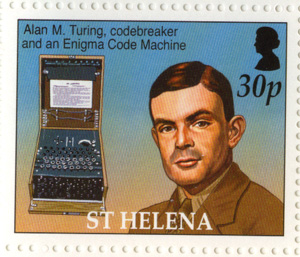 HMS Nelson Enigma HMS Nelson visited St Helena on 18 May 1941 and is named after Vice Admiral Lord Nelson, the hero of Trafalgar. Flagship of the fleet between 1927 and 1941, Nelson was hit by a torpedo on 27 September 1941 and was out of action for eleven months. The Italian armistice was signed aboard the Nelson on 29 September 1943 by General Eisenhower and Marshall Badoglio. After seeing further action Nelson returned to England at the end of 1945, remaining as flagship of the Home Fleet in 1946. This illustrious ship was finally scrapped in 1948. A turning point for the allies in the Atlantic was the exploits of Alan Turning and his Enigma code-breaking machine. St Helena played its part in the monitoring of German Naval Traffic. A wireless station at Half Tree Hollow Naval Garrison was one of three working closely together. The others were Ascension Island and Sierra Leone and if any of the stations picked up a signal, an alert was sent to the others by inserting a series of characters in the cable strean and stationg the frequency and bearing. The other stations would monitor the frequency allowing cross bearings to be taken. IOnterestingly, the Garrison on St Helena had its own paper called The Bush Telegraph!