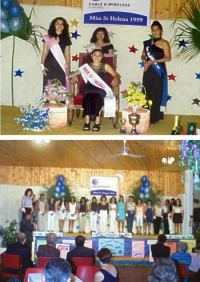 The Miss St Helena Contest which was organised by the Half Tree Hollow Guiders, was held this year at the Consulate Restaurant/Ballroom in Jamestown, on Friday night 14th May. The usual venue  The Prince Andrew School Hall, which can accommodate over 500 people, was unfortunately not available due to renovations being carried out there. The three hundred tickets that were available for this event were sold within an hour. As expected, the demand for such an event was even greater and because of this a live video recording was relayed on big screen to another ninety plus people in the Dining Room of the Consulate Hotel.

The Contest commenced just after eight – after the arrival of His Excellency the Acting Governor and Mrs Clancy and the introduction of the five judges – with the nineteen young ladies who entered, parading in their casual wear. The girls then changed to eveningwear. All contestants looked very elegant but a bit nervous, even though they were put at ease by the two comperes for the evening  Mrs Barbara George and Mr Derek Richards. 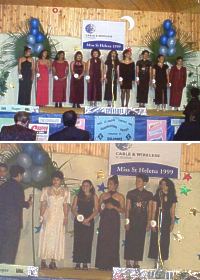 They were also at times escorted by the two young men who has been chosen to take part in this years games in Gotland. It must have been a nightmare for the judges to shortlist to ten and then to five.

From the short-listed five, our Miss St Helena 99 – Miss Pamela Constantine of Jamestown, also the 1st Runner Up  Miss Peggy Moyce of Jamestown, and 2nd Runner Up  Miss Marianne Young of Half Tree Hollow were chosen. Our current Miss St Helena  Miss Maria Benjamin then crowned Miss St Helena 99 followed by His Excellency presenting the trophies, and the Cable & Wireless Manager- Mr Hensil O Bey presenting her with a cheque for £500. His Excellency also presented the 1st Runner Up with her prize of £250 and the 2nd Runner Up with a prize of £150. Consolation prizes of £20 each were given and presented by Solomon & Cos Managing Director. After the presentation of bouquets by Mrs Clancy and short speeches by His Excellency and Mrs Ivy Ellick  Guide Commissioner, dancing to Barry and His Bandwagon continued until 1.30am.

The event would not have been possible without the sponsorship of so many and thanks are extended to the following for this:-

All other prizes etc was sponsored by: –

The Half Tree Hollow Guiders would like to thank everyone for their support  too many names to mention without forgetting someone! Proceeds from the organising of this event will go towards funds for building a hall in Half Tree Hollow for the Guides, Brownies and Rainbows.