A POTTED HISTORY OF

THE FLORA OF ST HELENA ISLAND

St Helena has an impoverished but unique flora of 49 endemic (found on St Helena and no where else in the world) species of flowering plant and 13 endemic species of ferns. This flora has been eroded due to the extinction of at least six species since the arrival of man on the Island.

Discovered by the Portuguese in 1502, goats were soon introduced to the Island together with citrus trees and herbs to provide vital provisions for passing ships returning to Europe from the East. These introduced species had a massive destructive impact on the native flora and fauna of the Island. Very quickly the goat population swelled to numbers in the thousands, browsing the vegetation, barking trees and preventing regeneration. Increasing fragmentation of the Islands woods was caused in the 16 th and 17th Centuries, the Island having previously been described as having a covering of “fine trees” and “big timber”.

Even further environmental damage was to be caused when the Island was eventually permanently settled by the British in 1659. Woods previously fragmented by over-grazing were now destroyed for timber for fuel, building and clearance for pasture land. The bark of the endemic Redwood tree, Trochetiopsis erythroxylon, was used for tanning the hides of cattle such that within 60 years of settlement the tree had almost been brought to extinction.

Originally heavily forested, the steep and rugged landscape of St Helena became almost completely denuded of vegetation. Wood was so scarce that species had to be introduced, like the European gorse bush and pine trees. Unusual species like the Boxwood, Stringwood and Burchell’s Bellflower were forced into extinction alongside other species of birds and invertebrates, never to be seen again. Species like the giant earwig, the world’s largest, a species occupying the damp environment of the gumwood forest floor has not been seen for over thirty years nor, the giant ground beetle of the drier scrubland. With both habitats lost it is likely that both species are now extinct.

Over two thirds of the Island are classed as barren Crown Wastes. Goats remained on the Island in large numbers, after various failed attempts to control their numbers, until the 1960s. Happily, the regeneration of the vegetation since this time is obvious to those who were witness to the state of the Island prior to this. However the species quickest to regenerate and colonise the Crown Wastes are exotic introduced species: Prickly Pear, Lantana, Chrysanthemoides sp, Olea africana, Schinus terebinthifolia… Inland the story is a little different, introduced timber species replaced the endemic trees, endemic vegetation was cleared for pasture land and later for flax, Phormium tenax, for the flax fibre industry and arable land. Exotic species introduced as ornamentals have spread into the last strongholds of endemic vegetation along the Island’s sickle shaped central ridge, causing the decline and extinction of the flora of the high moist altitude vegetation by invading their habitat niches.

The original vegetation of the Island has been reconstructed using past records and roughly divides into seven main vegetation types. These habitats together with the endemic and indigenous species which they once contained are described in brief below. (The map below shows just 3 zones – the dry outer zone [sea level to 400 m] – the medium altitude zone [400 to 600 m] – the peaks zone [600 to 820 m]/J Ekwall). 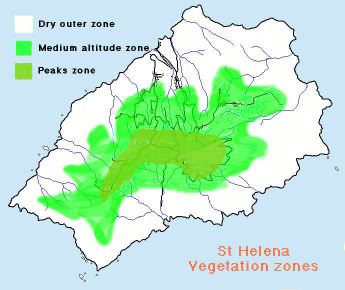 Endemic tree ferns, Dicksonia arborescens, dominate the moist, mist engulfed vegetation zone occupying the highest elevations across the Island’s central ridge. The spreading Black Cabbage Trees, Melanodendron integrifolium also endemic to the Island, with their daisy like flowers are another dominant species together with ferns. The tree fern thicket is the only vegetation type that can still be found to any great extent on the Island today. Yet this is still under constant threat from invasive weeds.

So called cabbage tree because of their leaves which form rosettes at the tips of branches. Largely Composite species or tree daisies, unique only to St Helena.

Another species of Composite, the Gumwood, Commidendrum robustum, dominated this habitat. Gumwoods came under intense grazing pressure and their wood used for fuel and timber. Today only fragments of this type of woodland remain.

On the drier and more rocky parts of the Island, particularly the western side thickets of small Ebony trees and gumwoods are thought to have co-existed. The Ebony, an endemic species to St Helena completely unrelated to the ebony that most people would immediately recognise, covered a huge area across this habitat type. Place names such as Ebony Plain and historical records and stories give evidence to this. Once used in great abundance for burning in lime kilns for the production of mortar for building, this dense black wood was quickly over-exploited. Soon only the stumps of trees were to remain and even these to had their use in the local in lay craft. Today only two small bushes survive on a precipitous cliff. Cuttings collected from these trees have been successfully propagated and cuttings and seed have been planted back in many areas.

On the outer parts of the Island with very low precipitation, exposed to wind and salinity the Scrubwoods, Commidendrum rugosum, were the dominant species. These small low growing and spreading shrubs with large daisy like flowers are highly palatable to goats and this habitat was heavily browsed until little remained. Together with the Ebony-Gumwood thicket these former habitats constitute the barren Crown Wastes. Today with the removal of goats from the Crown Wastes the scrubwoods and other endemic and indigenous species associated with this habitat are making a recovery.

In areas of saline soils the St Helena Tea Plant, Frankenia portulacifolia and the indigenous Samphire, Suaeda fructicosa, were the dominant species although the scrubwood was associated with this habitat. Also browsed almost to extinction the species of this habitat are making a recovery. The most successful being the halophytic Babies’ Toes, Hydrodea cryptantha, which is now spreading back in large numbers over much of the outer parts of the Island.

Conservation efforts to save St Helena’s endemic and indigenous species and habitats.

The Environmental Conservation Section of the St Helena Government Agriculture and Forestry Department is responsible for working towards the conservation of St Helena’s unique habitats and species. Working from their base, the Endemic Nursery, these rare and endangered plant species are propagated for re-introduction back into the wild – where that is there is some wild’! Species recovery programmes are on-going, particularly for those species so reduced in numbers that they would not survive without intervention and may have genetic and reproductive problems.

In March of this year (1996) St Helena’s first National Park was proclaimed. The Diana’s Peak National Park covers and area of 64 hectares across three of the main peaks along the central ridge where the last vestiges of tree fern thicket remain. The battle has now begun to reverse the invasion of exotic alien plant species such as: Buddleia, Buddleia madagascariensis, Bilberry, Solanum mauritianum, flax, Phormium tenax and Whiteweed, Eupatorium pallidium, and restore the tree fern thicket and cabbage tree woodland.

In the local St Helena news paper each fortnight, we are publishing fact sheets about each of the endemic species of flowering plant. I have reproduced the first of these here for you to find out a little bit more about St Helena’s fascinating flora.

For further information you can always write to us here on St Helena, care of:

List of endemic flowering plants and ferns of St Helena