To visit Tristan da Cunha is to visit another world – another life, another time.

Situated at 37 South and 12 West and 2000 kms from St Helena and 2800 kms from the nearest mainland Cape of Good Hope in South Africa, Tristan rises out of the ocean, it’s volcanic peak crowned with an almost permanent cap of white cloud. Situated in the South Atlantic, summer on Tristan da Cunha falls from December to March. During the winter months the central peak,rising to a height of 2010 metres, is covered in snow.

The island is roughly circular on plan with an average diameter 10 kms andhas a total area of 78 sq kms but only 5 sq kms of flat area at the northwest. Narrow valleys or gulches are radiating out from the central peak. During the wet season and close the famous “roaring 40ies” the steep valleys become fast running torrents washing minerals down from the slopes, to the regions below. On the northwestern plain, the deposits has formed green fields where the islanders grow their potatoes.

he 40 kms of coastline is exposed to the storm tossed seas, comprising magnificient basalt cliffs, some is rising steeply to 600 meters. The surrounding seas are rich in fish, providing Tristan da Cunha with one of its main sources of revenue – crawfish. Caught and deep frozen, the crawfish is shipped via South Africa to the United States and Japan, where it is much appreciated as a delicacy.

The other main source of income of the island is the sale of postage stamps, which are collected by numerous philatelists and collectors all over the world.

Brazil to Cape of Good Hope. However he found it was impossible to land as the sea was tempesteous. The first settler to arrive on the island was an american – Captain Jonathan Lambert – who landed in 1811 and promptly declared to kane absolute possession of the island of Tristan da Cunha. Unfortunately he drowned while fishing in 1812 together with 2 other men.

In 1816, the british annexed the island and set up a garrison as a precaution against the French who, it was thought, were planning to recue Napoleon from exile on the island of St Helena.

In the end it was Corporal William Glass from Kelso in Scotland, who is regarded as the Founder of the present community. Following a tour of duty at the garrison, he returned with his wife and two children, two companions, a coloured woman, they made up the total of six inhabitants after the garrison had finally departed.

The community was still no more than eleven flax thatched cottages bulit from blocks of volcanic rock when, in 1867, HRH Prince Alfred, Duke of Edinburgh and second son of Victoria, visited the island while voyaging round the world and gave the settlement of Edinburgh its present name.

The Settlement of Edinburgh now numbers just over 300 proud and hospitable people with only seven surnames between them. Through the islanders veins flows the blood of English sailors from Nelson’s fleet, Americans, Italians, Dutch and mulattos from St Helena and South Africa. English is the native tongue, albeit a slightly strange, preserved Georgian dialect laced with a few early Americanisms.

The sea around Tristan da Cunha is blue and, in the summer, the sun is warm. The tableland above the cliffs is lush. Just above ea level on the north-west corner of the island there is enough flat land to accomodate the Settlement. Southwestwards stretches space for grazing and the famous potato patches.

Tristan da Cunha with its neighbouring islands, Inaccessible and Nightingale, is an ornthologists dream with fourteen different types of petrel including the greater shearwater, the prion and the storm petrel; the rockhopper penguins; the yellowed-nosed albatross and the wandering albatross.

The Settlement of Edinburgh has a distict air of yesteryear about it, although it has all the moderna conveniences of mains water, electricity and sanitation. There is a small but interesting museum, a craft shop, a swimmingpool and a radio-station. Old style local shops exist and a large supermarket.

Life in Tristan da Cunha has strong family loyalties and high moral standards. The island is self supporting with a thriving economy, the people well provided for with income tax tax less a pound per annum. Serious crime i 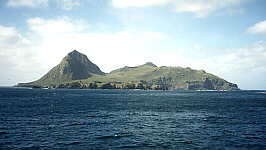 s unknown, unemployment is virtually non-existent. In 1961 a dramatic volcanic eruption forced the evacuation of the entire island, They were taken to what we glibly refer to as ‘civilisation’. Almost all chose to return to the island when the the eruption was over.

This is called “the remotest island in the world”. The Union Jack flies over the houses and the hearts of the islanders are as warm and generous as they have always been.

TdC Association – Pictures from The AGM in Woodgreen, April 7th 2001

Tristan da Cunha Association – Pictures from The AGM in London in April 1, 2000