The AGM this year was held att The Royal Geographic Society in London (close neighbour is Royal Albert Hall).

On April 1 more than 50 members attended the meeting, which was opened by its President and former – Mr Allan Crawford. After the usual formal agenda – by the way – the board was reelected for another year! people mingled, looking at the display of stamps and First Day Covers for sale, we also had the opportunity to see a forgetten documentary, made by The Royal Geographic Society in early 1962, just some months after the volcano erupted. The film was rediscovered in the deep cellars of the Society and was prepared – just in time for this meeting. It was a thrill to see the pictures from Tristan da Cunha.

Another exciting(?) matter that was presented during this meeting, was the proposal of a new harbour (some miles west of the excisting one). Experiments is undertaken to use the islands lava for the construction.

For me, this was the first time ever to visit the AGM and also to meet Mr TdC himself Mr Allan Crawford. I have read his books and also his adventures during the Norwegian expedition back in the late 30ies.

Now, at the age of 88, he presented his latest(!) book Penguins, Potatoes and Postage Stamps.

Some pictures from the AGM

The Presidium – behind the flowers Mr Allan Crawford

Pointing out the new harbour

Details of the new harbour

Mr Allan Crawford and me

The Secretary and The Chairman

Display of books from Miles Apart

A Swede and a New Zealander 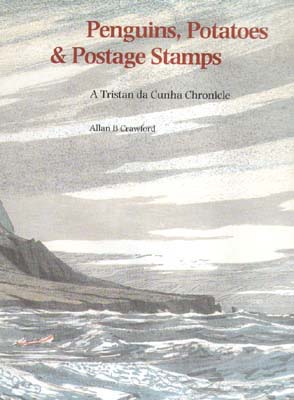