Upon their arrival in Jamestown on December 11, John Ekwall and Jan Tunér received an invitation from His Excellency the Governor and Mrs David Smallman, requesting their presence at a cocktil party held at Plantation House on Friday the 12th.

Chief Treasurer. Among the 60 guests you would find the entire staff of Radio St Helena, including all the dedicated volountary producers. Cable & Wireless was represented by its General Manager George Stevens, its chief engineer and technical manager. Among the guests were also the long-time St Helena expert Manfred Rippich from Germany, now on his second visit to St Helena.

A speech was held by Radio St Helena Station Manager Tony Leo, explaining the birth and history of the annual shortwave transmission and the impact this event has had on worldwide promotion of St Helena.

He emphasized the constant development of the initial idea, taking the recent addition of an interactive web-page as an example of the constant flow of new ideas.

Governor Smallman confirmed the importance of the transmission, stating that this was a very cost-effective way of promoting the

island. In fact, Governor Smallman had made a speech over the air at the beginning of the transmission and had then indeed stayed in the studio for the rest of the transmission. He assured he would be there next year again for the mere pleasure of it. It had been a particular pleasure having a young girl from the UK phoning in, telling about her very pleasant stay on the island and sending a greeting to the Governor. It did not

take the Governor very long to return the greeting, he was in fact just a few inches from the microphone! Mr Smallman then presented two handmade wooden plate ingravings to John and Jan in appreciation of their efforts to promote St Helena. The inscription reads: -This is being prepared to (John Ekwall/Jan Tunér) in appreciation of your outstanding work in promoting Radio St Helena and the island in general. To commemorate your visit in the 30th anniversary of Radio St Helena – 1967-1997.-

In his speech Jan Tunér thanked the Governor and Radio St Helena for their kind gift and appreciation, stating that the annual transmission was unique in many ways. Not only that it is an annual shortwave transmission from a small and isolated community. It is also a most unique combination of the old and the modern.

Sending out a flea-powered shortwave programme in an old-fashioned manner, the broadcast is also connected to the most modern fashion of communications – the Internet. And even more so: it is a truely interactive communication, with listeners given the opportuinty of an international phone-in, ability to follow the broadcast on the screen and indeed to send e-mails. He also declared that the St Helena web-page has a life of its own. Initially the majority of callers were dx-ers and hams. These are soon outnumbered by bothanists, geneaologists, adventure travellers and so forth. The once-intended radio web page has become The St Helena info centre. 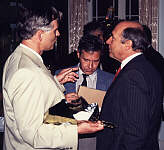 John Ekwall went on to explain how the Internet works and how it is progressing, the net not being available on the island yet. He also stated that being on vacation he could not present a weather forecast for the forthcoming holiday season but he did

promise that the island would be free from snow on December 25th.

The celebration was continued at The Exile´s Club in the Briars, hosted by George Stevens of Cable & Wireless.