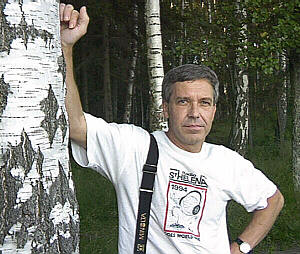 About myself: Born 1950. Single. Studied geography at the University of Stockholm. Between 1973 and 2012 employed at the Swedish Meteorological and Hydrological Institute (Swedish Met Office – SMHI) but now “free”. Moved to Backaryd north of Ronneby in the province of Blekinge, southernmost Sweden Main interests besides meteorology are geography, cultural and natural topics related to my summer island and radio. Been DXer since 1965 (several times won the championships – Nordic as well as Swedish), main interest was Latinamerican radiostations but now the interest is fading away but still in mind. During the 80 – 90ies arranged special radio shortwave-broadcasts from Gambia and St Helena. During May-September I spend the most time on my summerisland – place for Ronneby Brunn Spa in the early 20th century -view some old postcards here