The first Web-party on St Helena – ever

During our voyage from Cape Town to St Helena an idea took form. Why not have a party for those who have contributed to www.sthelena? We knew that onboard the RMS Sthelena was our friend from the mailing-list Mr John Gasbarre (known as Islandman), we also knew that on St Helena was another subscriber – Mr Urs Steiner with family. Well, it turned out more and more that this could be a nice opportunity to gather friends of the Internet and St Helena one evening. It was not easy to find a 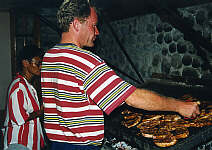 suitable place for the happening – the first Web-party on St Helena – which still lacks this facility to the world. But when we met Mikael Olsson (a Swede), a contact we had made earlier during the years, who has been on St Helena for more than a year, we just threw out the idea. Why not, he said, you can use this place – we have a barbecue as well as plenty of space in the garden. He then showed us the facilities and also what was needed for a good party. The proposal from “Mike” and his companion Mrs Bernice Spencer was accepted by us. We then just had to fix a day – it turned out to be Monday before Christmas. We then try to contact our “victims” – the people who in one way or another has helped us with information for the web-page. A lot of preparations then took place – with help of Mike and his friends. On Monday evening people rushed in to the garden – Manfred Rippich was the first to arrive.

He was to our surprise on the island NOT giving us notice until we arrived. Manfred contacted us back in 1993 regarding an article in a German magazine. other guests were Tony Leo and Derek Richards with wife Linda (from R St Helena), Urs Steiner with

wife Sue, Islandman, people who we met on the RMS – Mark with fiencee Belinda, Joanna and James (both will be on the island for more than a year working for the Government), Stedson Stroud (a Saint with lot of ideas), Iva Henry (the Postmistress), Pat Musk (our landlord and also the Sheriff of St Helena) and others. Jan and I had a surprise for the guests – we could present a typical Swedish bun (named after St Lucia – the Saint) with saffran and raisins specially made for us by

the bakery of Benjamins. It was a success! I could present some emails from the mailing-list for some persons, among them Tony – isn’t he a little surprised after reading a letter from a close friend of his? After that we invited the people for BBQ together with 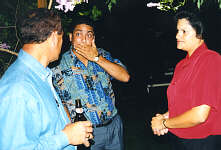 wine or beer. Then there were a lot of discussions around the tables. Tony could tell the true story about “peanuts” – an amazing story about what could happen in a live-broadcast and using nick-names. Of course more could be said about this web-party. I know most of the guests appreciated our small geisture og having this party. Hopefully we, I mean the web-page, can have some positive influences in the coming future. The party went on after midnight and we were quite satisfied of having some 25 guests.